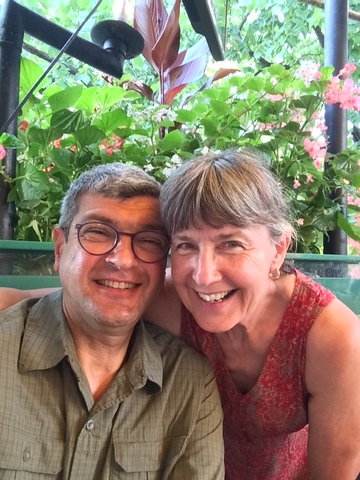 We are Linda and Pierre, obviously. Like many before us we love to travel and some of our travels are covered in the lponthemove.com website. This website is geared towards the change of lifestyle that we will be experiencing in retirement.

We have bought a travel trailer – a Canadian made Escape 19 foot trailer – we wanted to stay under 20 feet as our research showed that more places can be visited with a smaller trailer. Linda wanted something small so Pierre would fill it with less stuff as Pierre likes lots of stuff. 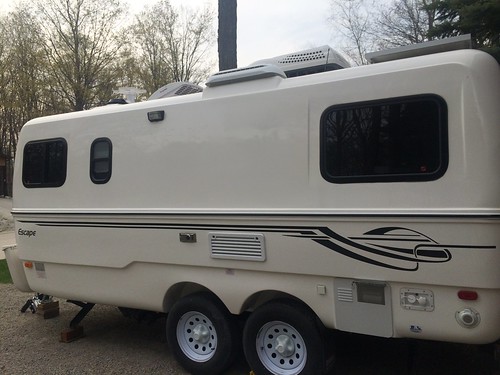 We chose the Escape for a variety of reasons. Pierre wanted an Airstream. Not in our budget! We looked around a lot. We went to RV shows and looked at a tremendous variety of RVs. The journey started at the Alaskan truck camper. This is a lightweight hard sided pop up Truck Camper that would fit on a 250 or a 350 series. Friends had one and we visited the factory. This is a well-made truck camper and a solid 4X4 truck would be able to take us anywhere we wanted to go. We had considered being full time RVers and this model of a full timer did not seem as appealing because we didn’t want our transport and home to be the same. At the RV shows we looked at a lot of beautiful Class A and B types and ruled them out for the above reason. We started to look at travel trailers. Many had beautiful pop outs and all sorts of features that would make it like a home. Many were lightweight, but we found them to have a lightweight build as well and we didn’t think these would do for full time living either. The Airstream had the quality we sought, but the price tag didn’t quite fit near our budget; even the used ones. We thought about the Casita and liked the look but found a Canadian version that seemed very well made. They unfortunately didn’t have a store or distributor. The sent us the contact information of people who had one and Linda and Pierre went to look at one up in Meaford. The owners were wonderful people who had a 19 foot Escape trailer. We sat in the trailer, the couple explained a great deal about the trailer and the experience they’d had with a variety of trailers so that we knew that they had wisdom about the choice. We talked about the trailer all the way home. We found ourselves comparing other trailers to the Escape, we even went to look at used Airstreams and eventually realized for our needs the 19 foot Escape would meet all our needs of: space, size, weight, affordability and quality build. We bought it! It will be ready for us to pick up in June of 2017 and this space will be updated with our initial and sustained reviews about the appropriateness of the vehicle for our needs.

The vehicle we had originally chosen was the Ford F350 for the truck camper and would have spare capacity to complete our adventures. Once we decided on a travel trailer rather than a truck camper the truck changed to a F150 as we didn’t need the extra capacity. The couple with the Escape were towing their trailer with a Toyota 4Runner and at the time we looked at it, we were still thinking of the F150 4X4. Slowly we started to explore something with a little better gas mileage and a closed back that could also do real off road travel. We looked at Jeeps and found that as much as we wanted one, we could not increase the towing capacity! Pierre really wanted a full convertible…not going to happen we realized. Linda mentioned that the 4Runner was a good choice and she tried very hard to convince Pierre…eventually succeeding. There were quite a few videos on YouTube to show the capabilities of the vehicle. The towing capacity was adequate and left some room for a safety cushion. Then the debate became, do we want a new truck or a used one. Price was factor so we started to shop used and found the price differential not significant enough to warrant a 3 year old coming off a lease. The 2016 also had 500 lb more towing capacity. The dry weight of the Escape trailer is 2950 lb with a gross vehicle weight of 5000lb…The way we see it is that we would not be traveling full so with a 5000lb tow capacity and even a 4000lb trailer we’re still in good shape. Now the journey starts to buy the vehicle and once again we’ll keep up the update.

Linda is retired and I am thinking about retiring but am not 100% on it. The journey is compelling!

If you’ve made it this far down the page, thanks for reading and we’ll look forward to hearing suggestions and responses. Follow us and spread the word.